Reprogramming cells in a physiological way to bring them back to a healthy state is what I have been studying for a lifetime.

To book a medical check up:

Or on the phone

Welcome to the era of Cells Reprogramming

The mechanism of physiological reprogramming of cells is present in a human organism at its embryonic stage in perfect equilibrium, which is therefore able to rebuild the life cycle of a single cell. Unfortunately while the years pass, this balance gets altered and the cells decay and die due to natural or pathological causes. Now it is possible to reproduce this regeneration mechanism even in adult organisms, counteracting its decay or degeneration thanks to the growth and differentiation factors.

Zebrafish, or Danio rerio, is a freshwater fish which lately has become the most used animal model for laboratory studies in the world, thanks to its particular characteristics. At specific times of the growth of Zebrafish embryos, it is possible to obtain, using sophisticated techniques, an entire epigenetic code capable of reprogramming human cells and differentiating them.

Pier Mario Biava, an occupational doctor, graduated in Medicine at the University of Pavia, specializing first in occupational medicine at the University of Padua and later in hygiene at the University of Trieste. He has been studying the relationship between cancer and cell differentiation for several years: he has isolated stem growth and differentiation factors that can inhibit or slow down the growth of various types of human tumors and, in general, direct the fate of normal and pathological stem cells. This is of a significant importance in the field of prevention and treatment of various types of diseases such as chronic degenerative diseases, as well as in the field of regenerative medicine in renewal and regeneration of tissues. This research can also have positive effects in the field of integrative treatments of stem cell transplants and, in the future, may even replace them. 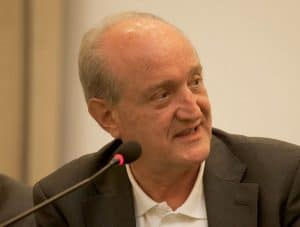 p align=”justify”>Having been a Professor at the School of Specialization in Occupational Medicine in Trieste for many years, he works at the Institute of Research and Treatment Multimedica of Milan.
He is the author of over 100 scientific publications and several books such as: ” L’Aggressione Nascosta – Limiti Sanitari di Esposizione ai Rischi ” published by Feltrinelli, ” Complessità e Biologia” published by Bruno Mondadori and ” Il Cancro e la Ricerca del Senso Perduto” published by Springer,” Il Senso Ritrovato “edited by Ervin Laszlo and published by Springer and “Dal segno al simbolo – The manifesto of the new paradigm in medicine” written with Diego Frigoli and Ervin Laszlo and published by Persiani.
He also takes part in the Scientific Committees of several international journals in the field of oncology and epidemiology. He is also a member of Vita365 and CMNSport Scientific Committee.

Tasks performed:
Scientific responsible for formation of the occupational health service in South America founded in Quito from 1984 to 1990
Member of the WWF Italia Scientific Committee from 1986 to present (still in office), Vice President WWF Italy 2006 -2009
Member of the CDA Unicredit Foundation from 2002 to 2005 where he leaded planning of all health cooperation interventions in Africa.

“GROWTH AND DIFFERENTIATION FACTORS have a significant biological activity, which is essential for maintaining cellular health. Some proteins are important for the life of mitochondria, others have the function of regulating cell cycle, immunity response and so on. Therefore the biological molecules of ROE EXTRACT are essential for maintaining cells in our body in optimal health state and revitalizing tissues, minimizing aging phenomena.”

It has been shown that the differentiation factors of the stem cells taken from the egg of Zebrafish, which has more than 90% of proteins in common with the human ones, are able to differentiate the cell cycle and reprogram cells in a physiological way (without genetic manipulation).

Dr. Pier Mario Biava and his team of scientists have shown that specific GROWTH and DIFFERENTIATION FACTORS can increase the life span of cells, preventing the cutting of telomeres and contributing to the synthesis of proteins, which stop the aging of cells.

MD Biava and his team now carry out specific treatments with the Molecular Laser. The laser is capable of delivering any type of drug or growth and differentiation factors taken from evolutionary stages from the Zebrafish embryo directly into the human body by penetrating the skin barrier and transporting the active ingredient molecules to the desired depth. The treatment is absolutely non-invasive and painless.

“Telomeres get shorter each time the cells divide. When the telomere becomes too short, the chromosome reaches a critical length and the cell can no longer replicate. This means that the cell ages and dies. However, GROWTH and DIFFERENTIATION FACTORS can be a very effective tool to promote cellular senescence antagonists in a physiological way. The result is a healthy cell and potentially an inversion of the aging process”.

The position of the Oncologists:

Below is the document written by the members of the “Scientific Committee” made up of University Professors of Oncology, Pharmacology, Surgery to evaluate the work published by Dr. Biava in International Scientific Journals and to then advise the medical class and patients about to possible treatments with differentiation factors studied by Dr. Biava. This document, called “POSITION PAPER”, presented at the National Conference organized by the Society of Medical Oncology (SIMO) held in Milan in June 2017, was approved by the oncologists of SIMO: this document states that the treatments proposed by Dr. Biava can enhance the traditional therapies of consolidated effectiveness implemented by oncologists, decreasing in the meantime the side effects. The conclusions of the oncologists are therefore the following:

The position of the order of the Biologists:

Here we report the article recently published in “Il Giornale dei Biologi” N 7 November / December 2018 which broadly summarizes the research and results obtained by MD Biava after many years of research. “Il Giornale dei Biologi” is the monthly magazine of the Order of Biologists and therefore the official journal of the Order of Italian Biologists.

I have created a team that represents me on the Italian and international territory: the Biava Vita365 team. This team is made up of specifically selected and trained healthcare professionals who operate on the basis of scientific protocols in the field of integrative treatments that involve the use of natural substances effective in improving the conditions of patients suffering from chronic-degenerative diseases, such as neuro-degenerative, cardio-vascular and inflammatory, as well as in the reprogramming protocols of pathological stem cells such as cancer, those present in psoriasis and auto-immune diseases.

The Biava Vita365 team is continuously trained and updated to improve integrative treatments based on the scientific research that I continue to pursue to give ever new perspectives to medicine, to all health professionals and in particular to the concrete work that with the members of this team I’m doing.

In order to have therapeutic suggestions, write me a detailed email of your case, attaching the medical reports you have available. The directions given by e-mail are suggestions only for information purposes only and are not to be used as a means of treating a disease. Only the medical examination can lead to more specific treatments. The address is: info@biava.me

To book a medical check up at one of the centers with a doctor who has undergone training with MD Biava, write us your details in the contact form at the bottom of the page and you will be contacted for an appointment, or call from Monday to Friday between 08.30 and 18.30 to the number

THE INFORMATION THAT ORIGINATES LIFE

Documentary made by director Thomas Torelli. It is an author’s portrait of Dr. Biava on the research done on the epigenetic code and the new possibilities of regenerating tissues, for use in oncology and to slow down aging.In this documentary you will find many answers both on the nature of mechanisms that mediate the transfer of epigenetic information to DNA: the differentiation factors and on the practical applications of these researches.

THE INFORMATION THAT ORIGINATES LIFE

Differentiation Factors are able to reprogram tumor cells by making them get back to a normal behavior i.e. to a normal phenotype.