Here is the code that originates life and that regulates the functions of all cells: the epigenetic code. Researchers from all over the world have believed to find it in DNA, or in the genetic one, investing enormous capital for its sequencing and in the various ongoing attempts to manipulate it for the most varied purposes. Instead, this function belongs only to that sort of software capable of regulating gene expression, that is, the epigenetic code “. Pier Mario Biava, occupational physician and researcher at Irccs Multimedica in Milan, has reached, after almost thirty years of studies on cell differentiation, the greatest possible confirmation, which he anticipates exclusively at Avvenire. And the achievement opens a paradigm shift.

Can you explain the meaning of this goal ?

I was able to understand how the code that originates life at the beginning of life itself works in its specific components. To understand the significance of this discovery, we must imagine our genome as the hard drive of a computer that can do nothing if it is not programmed. Here, the set of elements that programs it, or that regulates the switching on or off of gene packets responsible for the synthesis of different proteins, is the epigenetic code, the “code above the genetic one”. Like an orchestra conductor he regulates the concert of life.

It is the set of factors that modulate the expression of the genome, essentially proteins but to a small extent also nucleic acids with regulatory activity, such as micro-RNAs.

How did he manage to analyze it?

I studied the epigenetic code in the short moment of life in which it is present in its entirety, that is, during embryogenesis. Only then is it able to regulate the genes that encode all the proteins in our body. When the differentiation is over and all the organs have formed, in fact, it is no longer possible to study it in its entirety because it is broken up into each organ where it will control its function.

In the last two years I have studied adult human stem cells isolated from adipose tissue, clarifying their fundamental aspects. Previously, I had identified in the Zebrafish embryo, a tropical fish used as a study model, all five stages of stem cell differentiation, and so I provided the specific factors present in the five stages to the team of Carlo Ventura, full professor of Biology. molecular from the University of Bologna, which tested them. The experiments have shown that there are different specific functions of the code and each is able to regulate the expression of different genes. We initially demonstrated the possibility of keeping stem genes active by preventing cellular aging. This work was published in 2015 in the journal Current Pharmaceutical Biotechnology, while the entire research project was conducted under the aegis of the inter-university Consortium National Institute of Biostructures Biosystems (Inbb), which brings together 23 Italian universities.

What are the main consequences of this discovery ?

Keeping cells young by preventing aging paves the way for tissue regeneration and the prevention of degenerative phenomena. Previously, the study of other phases of the regulation code allowed me to identify other factors capable of slowing down cell multiplication and therefore, of slowing down or blocking the uncontrolled growth of cells as occurs in tumors or in diseases such as psoriasis. This regulation slows down the growth of tumors because it activates the “oncorepressor” genes that try, in the first instance, to repair the damage but, if too extensive, trigger the process of programmed cell death.

The fraction of the epigenetic code that we have isolated for the first time in the world has proved to be able to keep the stem genes active in a natural way capable of preventing cellular aging. These are the same genes that Shinya Yamanaka, the Japanese researcher Nobel Prize for Medicine 2012, had artificially introduced into the adult cell to make it become a child again, obtaining the now famous “induced pluripotent stem cells” or IPS. But their applicability is still uncertain because this genetic manipulation blocks cells at the proliferative stage. And these, once transplanted, easily give rise to tumors. In our research, on the other hand, cells remain young without manipulation, precisely on the basis of a “physiological” regulation. A radical change … Life is organized on the basis of information programs that provide, like applications, precise instruction packages : these are inseparable units, which are not used if they are fragmented. It’s like downloading an app on your mobile: it doesn’t work if you don’t download it all. Therefore, a medicine is born that considers the organism not as the sum of individual parts or cells but as a complex system in which flows of information flow, where the disease is given by the alteration of the mechanisms by which this communication takes place. By restoring it, healing is possible. And, above all, biology is not just matter and energy but intelligent information that informs everything about itself: the balance of the Universe is ensured by this information that already has in itself everything that is needed for life.

Cell growth and differentiation factors are the key to keeping stem cells young, physiologically and safely.

To book a medical check-up: 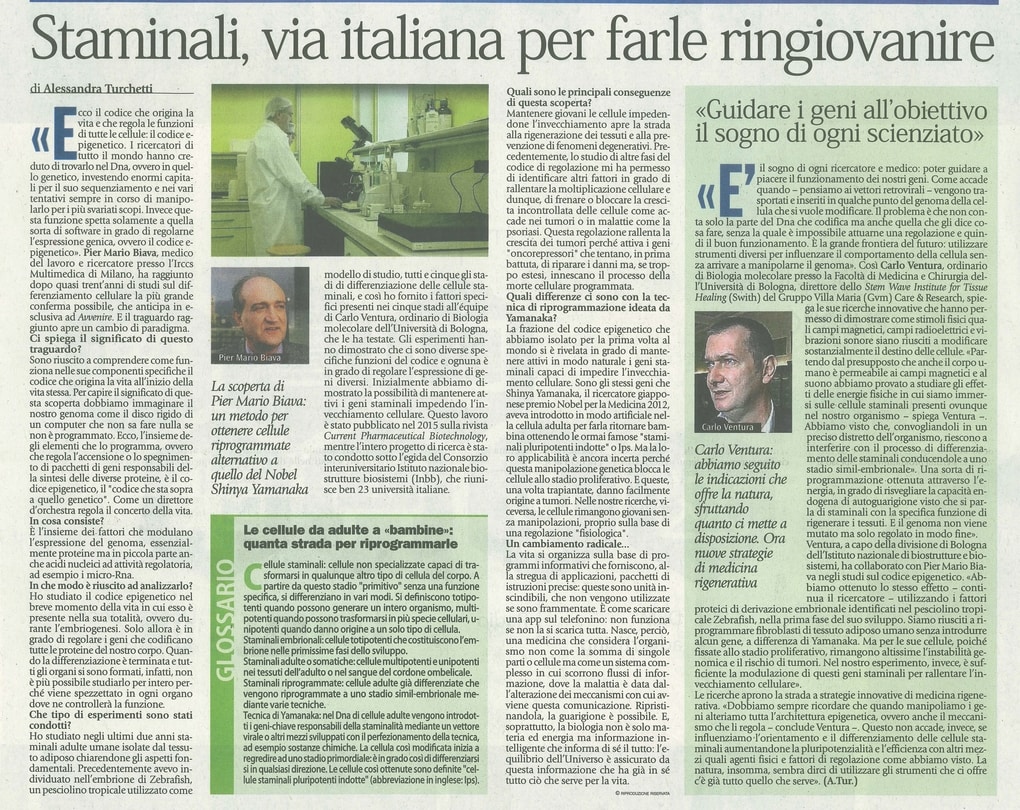