The discovery is made by an Italian scientist, who has isolated some elements capable of correcting the behavior of diseased cells

Cancer faced as a partially reversible pathology, with the aim of correcting the behavior of cancer cells: with this approach Pier Mario Biava, researcher at Irccs Multimedica in Milan, he managed to find ways to slow the progression of the disease. In fact, Biava has isolated some cell differentiation factors that are able to inhibit or slow the growth of various types of tumors.

The discovery brings to medicine a new model of antitumor therapeutic intervention, which is centered on the use of differentiation factors present in animal embryonic stem cells. As explained by the research published in the journal “Current Medicinal Chemistry”, Biava used a homeopathic medicine based on cell differentiation factors, obtained from Zebrafish or Brachidanio Rerio embryos, as they have been shown to be active in the reprogramming of some types of cancer cells .

The researcher started from the hypothesis that cancer cells can be considered as mutated stem cells, blocked in a multiplication phase between two different stages of cell differentiation.

“Cancer cells lack the information to proceed with their normal differentiation development. If we provide these cancer cells with the right information to proceed with their regular development, the mutations that are at the origin of the malignancy are resolved, the cells return to differentiate correctly and in fact normalize “.

The difference between embryonic stem cells and cancer cells is that cancer cells, unlike normal stem cells, are no longer able to complete their development due to the mutations they have undergone and to differentiate regularly. Correction of cell gene expression with cell differentiation factors brought cancer cells back into physiological normality. 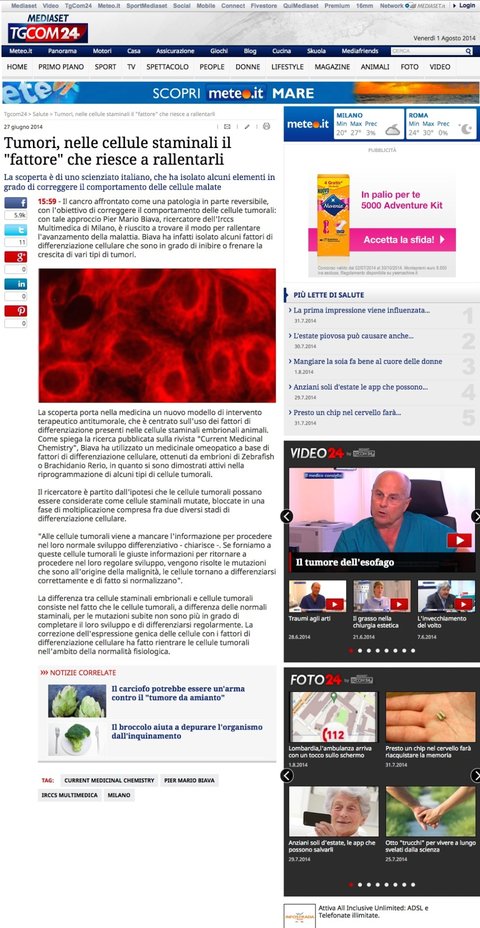